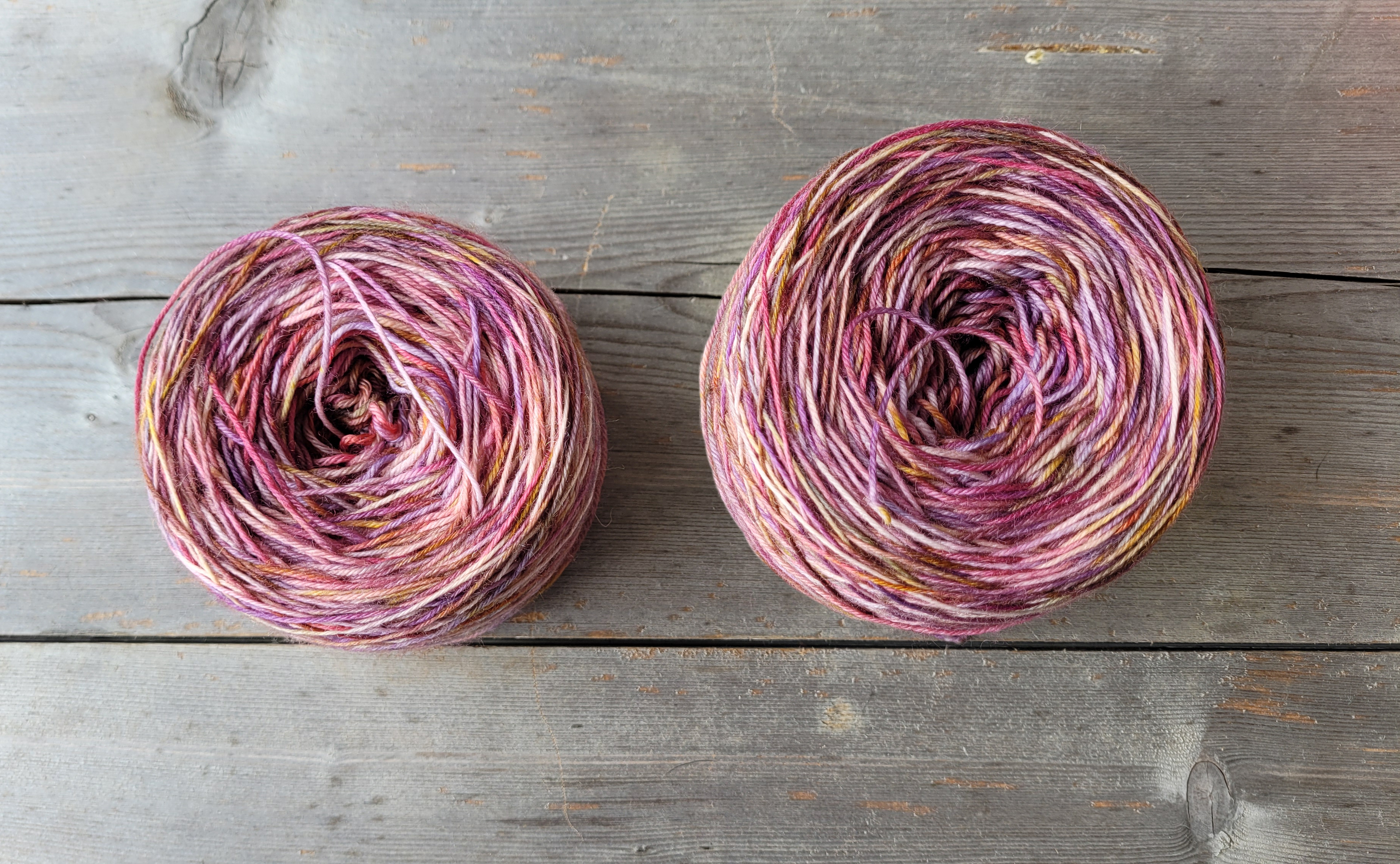 Have you ever considered the tension your yarn is under once it’s been wound into a cake or ball?
One of the main reasons yarn is sold in a skein is to preserve its elasticity. So, from the second you wind it, it’s being held at a stretch.

Animal fibres in particular have a gorgeous spring to them. If you stretch them, they snap back on release. This elasticity gives a finished garment a bounce and a wearability that is a pleasure to behold.

But if these fibres are held at their limit for too long, they can lose that elasticity entirely. That’s why you should only wind your skeins when you intend to knit or crochet with them soon after. It’s also why those old balls of donated yarn tend to seem so lifeless – they’ve been held at a stretch for decades. Yikes.

Ball winders and swifts are an amazing piece of kit I believe every crafter should invest in, but there’s a pull between swift and winder, so even they can add tension to a newly-wound skein.

See the two cakes below?

They’re actually the exact same skein.
The one on the left has been wound directly from the skein on my swift.
The one of the right is the same ball, wound from the first cake into a second, much more relaxed cake.

Look at the size difference! And imagine the tension the first one would have been under had I only wound it once.

So, tell me. Are you kind to your yarn? Do you ever rewind?

And if you haven’t done it before now, have I convinced you to start? I sure hope so! And I bet your yarn will thank you, too!

Oh! And… psst! The yarn I’ve pictured here is a beautiful skein of Ballyhoura Fibre yarn. It’s Cierra’s 4-ply sock in colourway “Pot Pourri”. Watch out for it in a pattern this autumn!
You can find the link here: https://www.ballyhourafibres.com/ 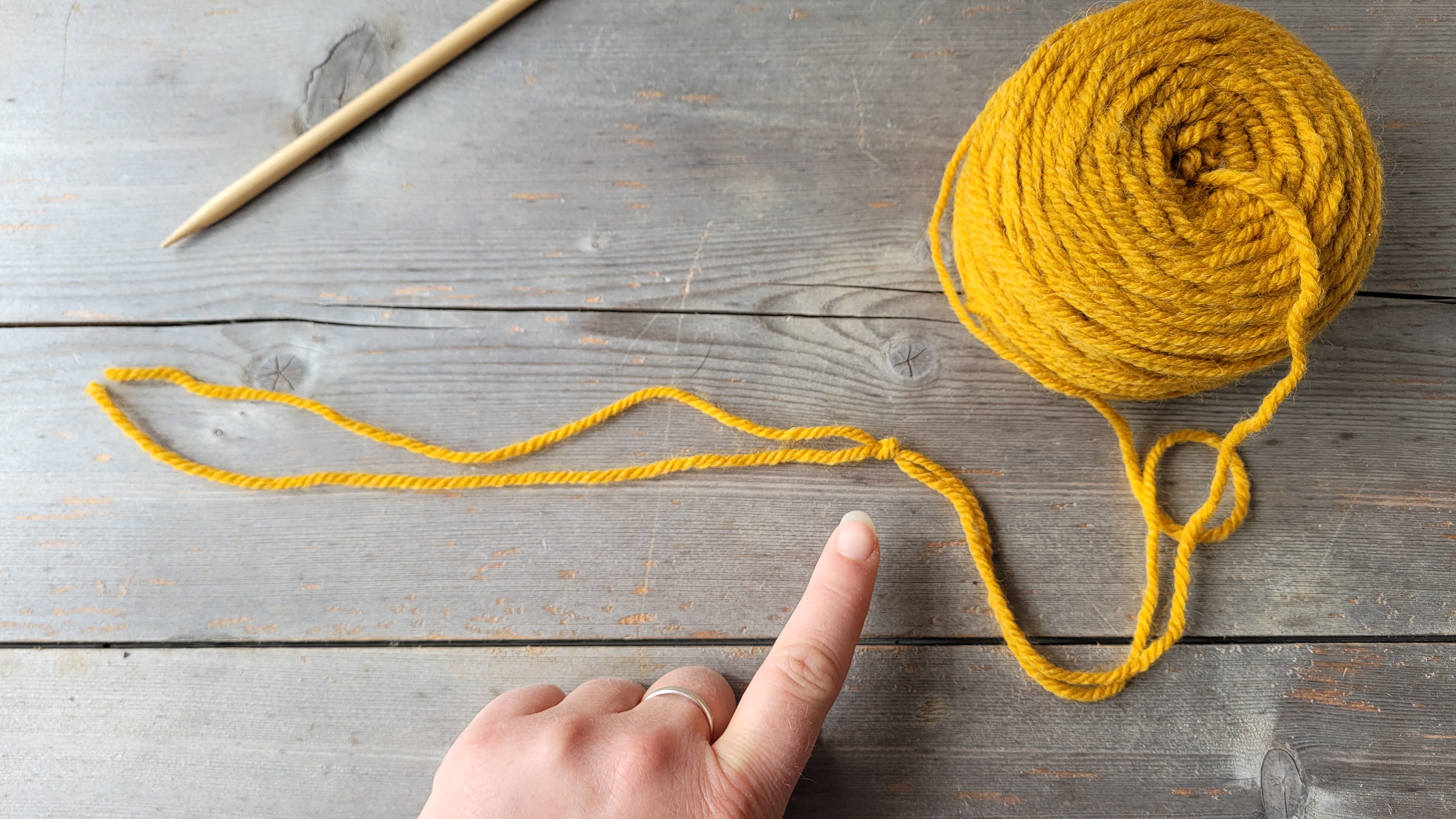 Knitters, don’t say I never give you guys anything!

This long Tail Cast On method is flawless.
You’ll never scrabble for yarn to make those last few stitches ever again.
Long Tail anxiety will be a thing of the past! And it’s so gosh darn easy.

Let me show you how.

Before we begin our long tail cast on.

Start off with your needle, and both ends of your yarn ball. Every ball has an inside end and an outside end. Fish them both out and have them ready to rock like this.

Knot the ends together

Yea, no… seriously.
I know a lot of knitters are averse to knots, but don’t worry, you can undo it later.
For now, gather your courage and make that knot!

Slip the needle between strands.

And then set your hands up as you would for a regular old long tail cast on.
Remember, the thumb holds the long tail, the index finger holds the new stitch.

After that, it’s just a matter of casting on as normal.
The bonus here is that your long tail will be exactly as long as you needed it to be because you’re feeding yarn out of your ball as you need it.

Do you have a tail or two more to weave in at the end?
Sure you do, but I think that’s a small price to pay for the peace of mind you get from possessing an infinite long tail!

Once you’ve cast on everything you need…

…and carry on knitting merrily.

Like what you see? Check these out!
They’re both knit/crochet combo patterns.